On the 29th of December, what was supposed to be a regular sonogram at the hospital turned out to be a 2 night stay. The sonogram showed that my amniotic fluids were dangerously low at 5cm. I was ushered to the labour floor and wasn’t allowed to drink or eat. I was told I was going to be put on an IV drip immediately, overnight.

My doctor said I was probably dehydrated and so they wanted to put me on a drip. I asked her why I couldn’t just drink more water and go home. But she explained that it could be very dangerous for the baby as she could crush the umbilical cord since there’s little fluid around her- and she could die. And the causes of low amniotic fluid could also be because her kidneys weren’t functioning properly and she wasn’t peeing out the fluid she was swallowing, or it could be that my placenta was old and not functioning anymore. She explained that if the levels did not go higher than 5cm the next day, we would have to take her out via C section since she is still breeched as well.
To be completely honest I was totally stunned and frustrated. I wasn’t afraid that she would be in danger because I’ve been feeling her move around in me and I knew she was alright. I was just frustrated at the situation. Also I didn’t expect her to be a 2014 baby. I even asked my doctor if we could wait 2 more days to cross to 2015 if we really had to take her out but she said it was not something they could wait for.
I then suffered what I felt was the worst pain I’ve even been through. The nurse said my veins were jumping and she poked the IV needle into my arms unsuccessfully 3 times till she gave up and called another nurse. She was afraid too, to try again because my hands were swelling up and I was crying uncontrollable to the point of hyperventilation. It was as if someone has stabbed me with a knife. Mark said maybe it was because I can’t take the pain but it we realized that it was really because it was not in the right place. The 4th attempt by a different nurse did not hurt at all and I was very surprised. 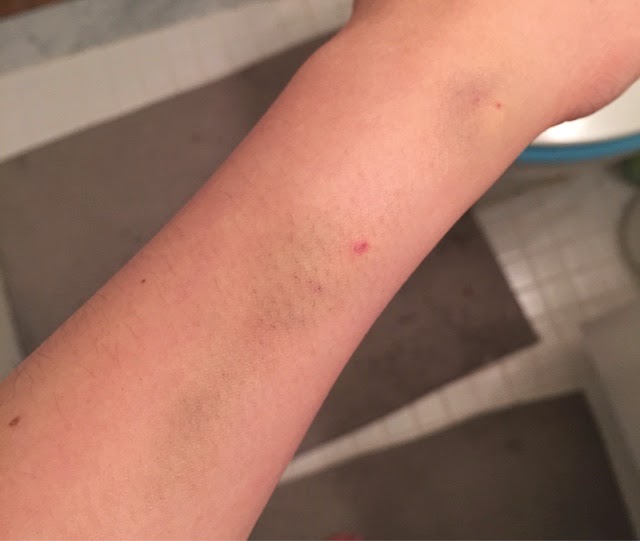 So, that painful incident was to be the start of my emotional roller coaster. I was finally transferred to a proper room at 2am before I cried myself to sleep. What was going on and why was this happening? I was really not prepared for this but by then I was so exhausted that I managed to fall asleep.
The next morning after going through 4 packets of the Drip fluid, they did another sonogram and this time my levels were seen as 4.4 cm. At this point, me and Mark started to get excited. Does this mean we are going to have the baby, TODAY??? Yes, my doctor said in a few hours we would do the C section. Tell your friends and family you’re going to have a baby, she said. We were so excited!! The thought of meeting Aletheia so soon was quite surreal but we had already emotionally prepared ourselves for this over the night.
I took a shower and the nurses prepped me for the C section ( even with the shave). And then an hour later my doctor walked in again saying – change of plans. The other specialist doctors whom she has to get clearance from felt that we should wait till 37 weeks since our baby’s heartbeat and blood work and vital signs looked really good. But if the levels of fluid went down to 2cm or less they would immediately perform a C section. This meant that I had to stay in hospital for 6 days in bed to monitor the baby’s heartbeat.
Our roller coaster headed downwards. Stay in hospital for 6 days stuck to a bed? Mark was comforting me that this would be much better for Aletheia. I knew it too and trusted the doctors but I just spiraled into bouts of tears here and there because I really don’t do well being stuck in a bed for 6 days.
That day they decided to take me off the drip and asked me to drink lots of water and just rest. My doctor said that chances were that I would not get out of hospital since my levels had dropped even after the IV drip. But if it did go to the normal levels which was closer to 10-12cm, anything significantly above 5cm, I could go home.
On the morning of 31st of December, they did another sonogram. Just before the sonogram I prayed a really quick prayer. God let me go home! I prayed for my amniotic fluid levels to increase. The night before I was just telling my friend who visited me that I was honestly tired. I didn’t know what to pray or declare anymore.. The struggle was real. I had just spent the morning of 29th of December declaring that Aletheia would be a full term baby and that she would not be breeched. I was charged with faith that I was really free from the curse of a sorrowful pregnancy but yet here I was in hospital. I felt like I had given up. There are times like this where I just didn’t feel like praying or saying anything and I didn’t feel like I had any faith left. I simply said God I commit this to you, whatever it is I know you love me and that’s the truth. I don’t know what to say God, but I know that this isn’t from you and I’m not going to assume you’re trying to teach me a lesson by giving me complications in my pregnancy. This is not from God. He gives good and perfect gifts – the devil comes to steal kill and destroy, not my loving father. But I had no words and no more energy. I simply WAS.
The sonogram results came back to a high level of 9.8! I could go home for New Year’s Eve! It was s crazy roller coaster ride and I was so extremely happy!
This New Years I am so thankful to just be out of hospital , for the friends that were by my side at the hospital and in spirit and who encouraged and prayed for me when I had no words or faith left. I’m so thankful that Aletheia is still growing strong and healthy in my womb.
On New Year’s Day I anxiously packed my hospital bag and got every single thing ready because after this ordeal- I just never know! But my baby girl, now your mummy and daddy are very ready for you and no matter when and how you come to take your first breath, we love you and will praise God for your life!

Look Through The Journey

All Ive Ever Written Here

If Things Could Be Categorized